Hot sauce master David Tran arrived in California in 1979 from Vietnam, humble and hungry but in need of a spicy additive worthy of his Pho soup. He quickly set out on a mission to produce one to share with his Southeast Asian community of Los Angeles, which was also suffering a hot sauce drought. Within a few months, his first chili sauce “Pepper Saté Sauce” was born and Tran began selling it door to door to local restaurants and markets. He named his company “Huy Fong Foods” in remembrance of the old Panamanian freighter, the “Huey Fong”, which carried Tran out of Vietnam, and chose his zodiac animal, the rooster, as his logo.

The Sriracha Hot Chili Sauce we all know and love was first sold in 1983, made from fresh, red Jalapeño chili peppers, vinegar, garlic, salt and sugar. Huy Fong Foods has never advertised their products, they simply let the sauce’s legend spread by word of mouth, and spread it has, like wildfire, now ranking as one of the world’s leaders in the hot sauce industry.

“Run free, my child, and spread the sweet, spicy gospel of truth.” 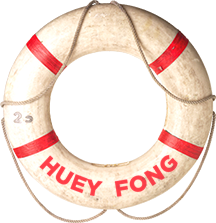